From the outside, we could think that it is super cool to be an electro festival programmer, in an idyllic setting on the croatian seashore”. But if we dig a little bit more, I’m sure reality is much different… Immersion in the backstages of a hard work  throughout this “hard life” interview.

Our interlocutors David and Andrew, directors and programmers of Dimensions, Outlook and Sunfall festivals, are two Londoners passionate by electronic music, who apparently don’t count their hours of work.

Tell us the truth : have you ever taken a bath in the Croatian sea?

The truth is every single day that we’re there we bath. I have a team that’s very busy out there but they have to swim at least once a day no matter how busy they get. It’s good for the soul. 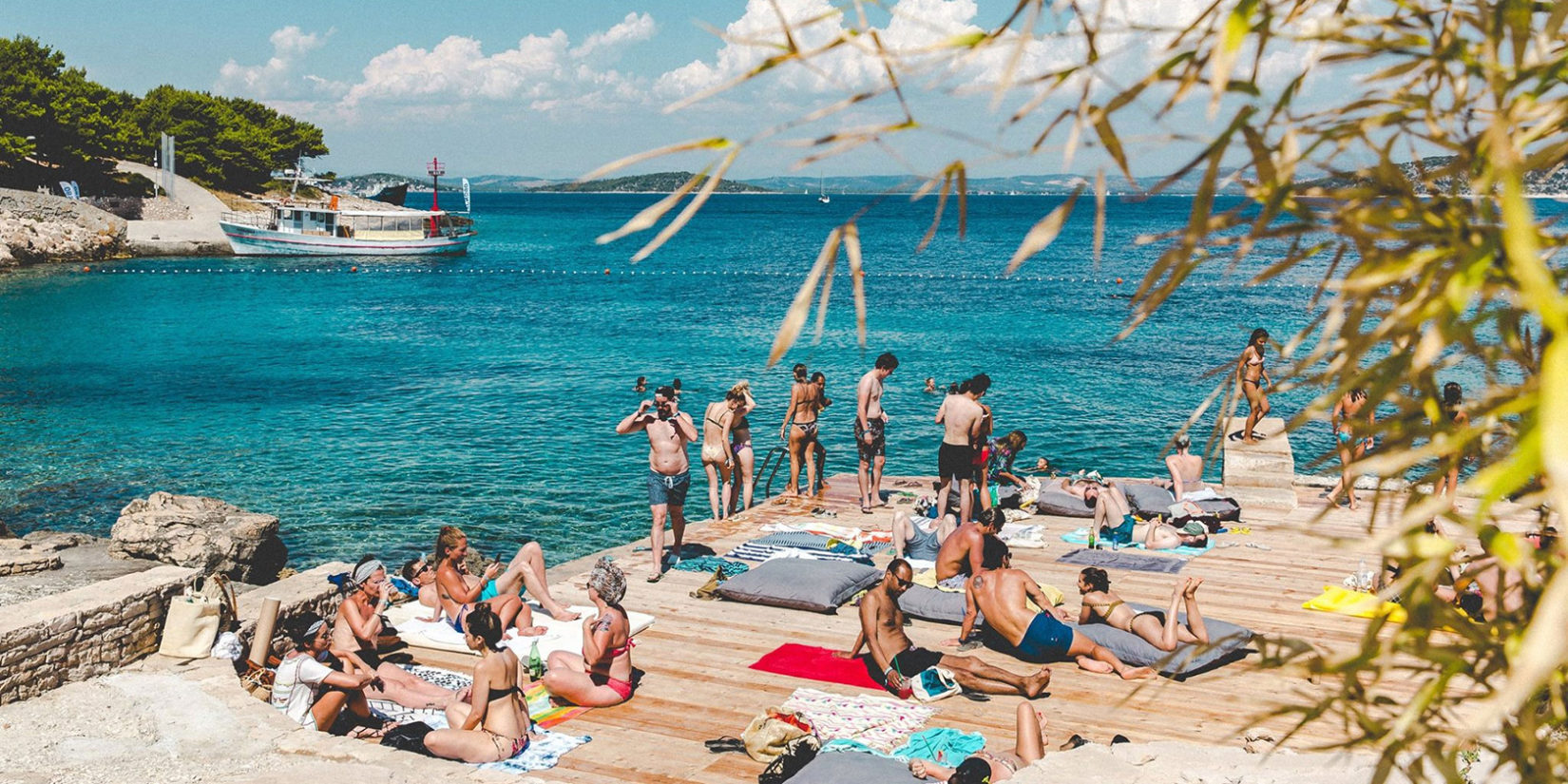 Bonobo, Caribou, Massive Attack, and Grace Jones this year… Where did the idea of a non-electronic music opening concert came from?

It always comes to the same question, the same point when we talk about artists, booking: it’s really simple, it’s not that we believe it’s really credible. It’s stuff that we love, we’ve always been into it. It’s not like we decided it today, it’s because we thought that we could do it, that the festival was mature enough. It was that simple we wanted to do it and show that side of ourselves.

Grace Jones, I mean, Grace Jones is Grace Jones she’s her own person so we hit her up with the hope that it would happen and it happenned. And she went for it. 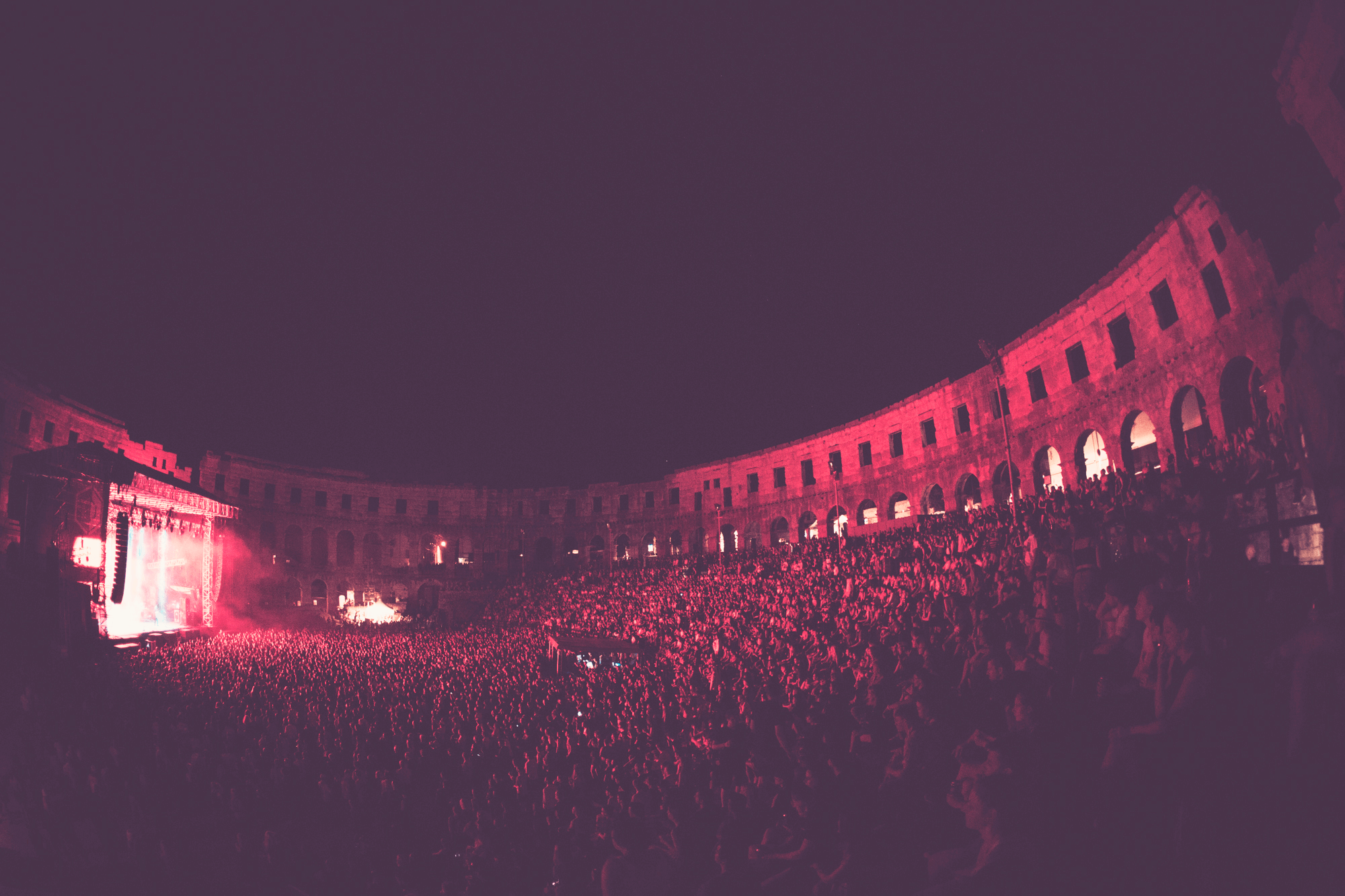 Off topic and personal question : what is the culinary speciality of the city of Pula?

Rakia and Lemon beer for alcohol. And obviously specialities with truffles, you don’t get them easely, you get them in Italy and in the South of Croatia but they are much much more expensive. 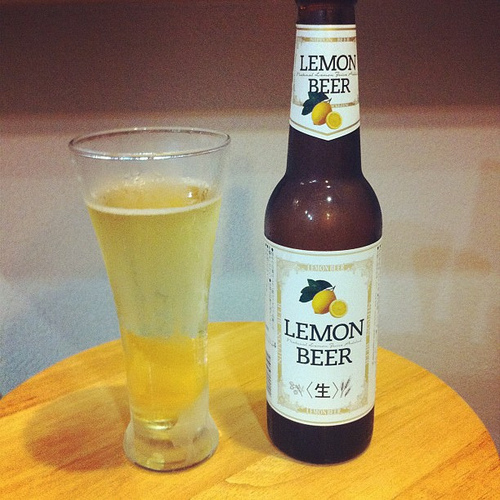 Have you ever received anonymous weirdo artits requests to share with us?

“A fresh clean pair of green socks” and “Two dolphins that are trained to mix records perfectly to replace me”.

Last june, Dimensions Festival was Dure Vie’s guest for Off International series at Rex Club in Paris. How many off parties are there worldwide and in how many countries?

Well I would say 25 countries, and number of parties around 45ish …

What we do is we try to reach people, so we feel like we’re extending te family a little bit each time. 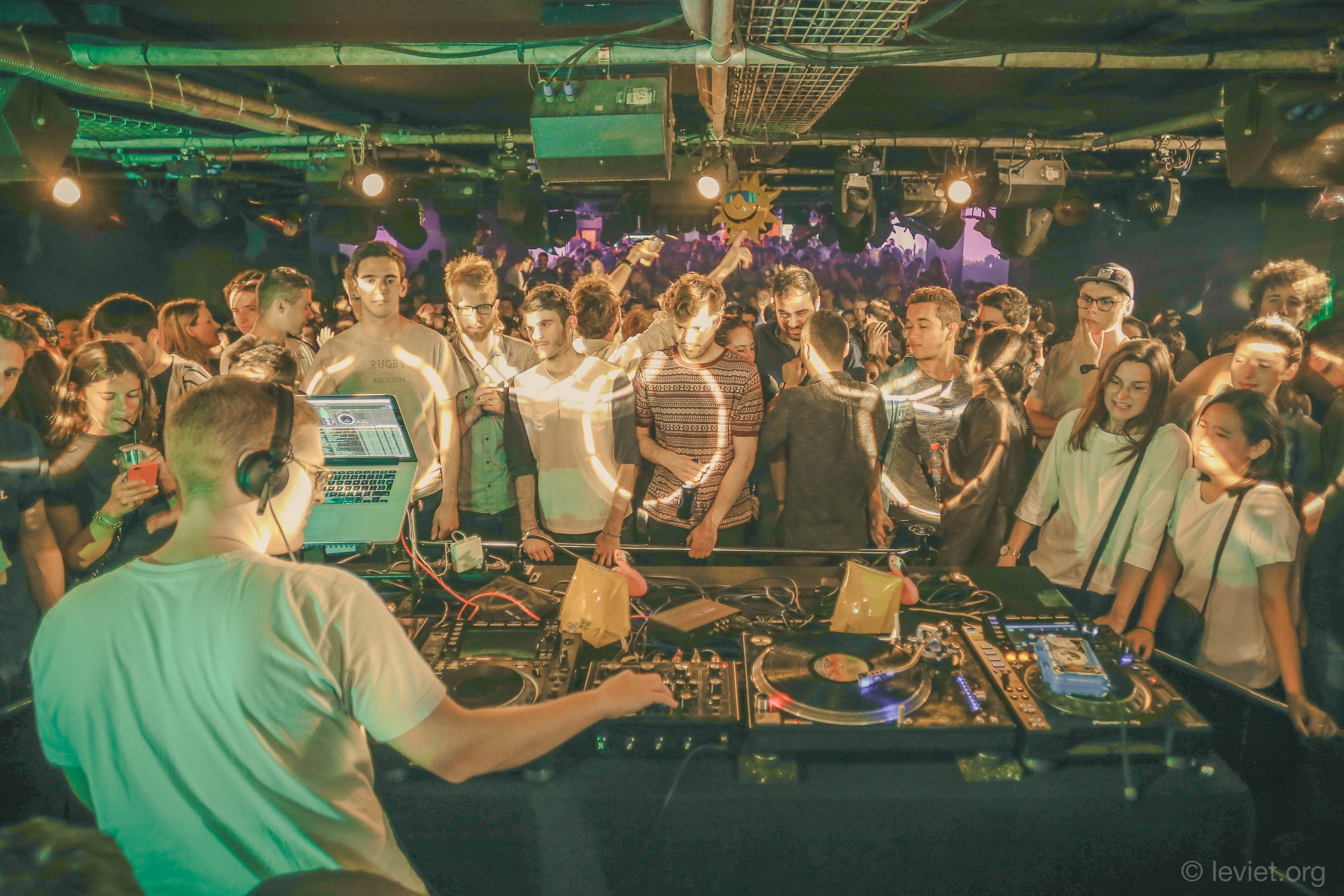 Is it possible to impose a chart to the promoters to make the events close fully compatible with Dimensions values?

It’s obviously different depending on the location, the soundsystem etc.

But the most important feeling is the feeling of people understanding us and feel part of the family, the understand us and what we’re about and we’ve became much closer with people this year. It’s about expending the family feeling out there so people can experience it, so they get excited to come to the festival. More than ever this year we had more and more telling us they were coming etc. We understand the limitations of being in a City it’s not like being in Croatia, but we kind of try and take this idea and export it I guess there are limitations but the family feeling is predominant.

In France we have an expression : «C’est donnant donnant » = « In life it’s a give and take ». On 2nd September 2017, you’re inviting Dure Vie to organize a boat party at Dimensions Festival with Dan Shake, Folamour and our resident dj Dusty Fingers. I am asking you in the Internet as a public place: are you coming at our boat party?

(laughs) Let’s see, let’s see. Okay we’ll tell you this if we come we’re going to wear a mask.

More seriously – whatever my last question was very serious – What security measures are being taken to avoid accidents on boat parties?

We have safety boats, that follows where the boat travels with lots of volunteers on it. And a safety advisor, who is the highest standard of security in europe.

It’s all checked out before, they approve all the boats and the railings etc. And we have like 6 volunteers on each boat with security gards. We mail out to everyone, and explain security mesures like don’t get drunk and jump overboard. There are health and security checks before each boat parties. And we know everybody on the boats. But the one thing that counts is the safety boats. We never had a problem. 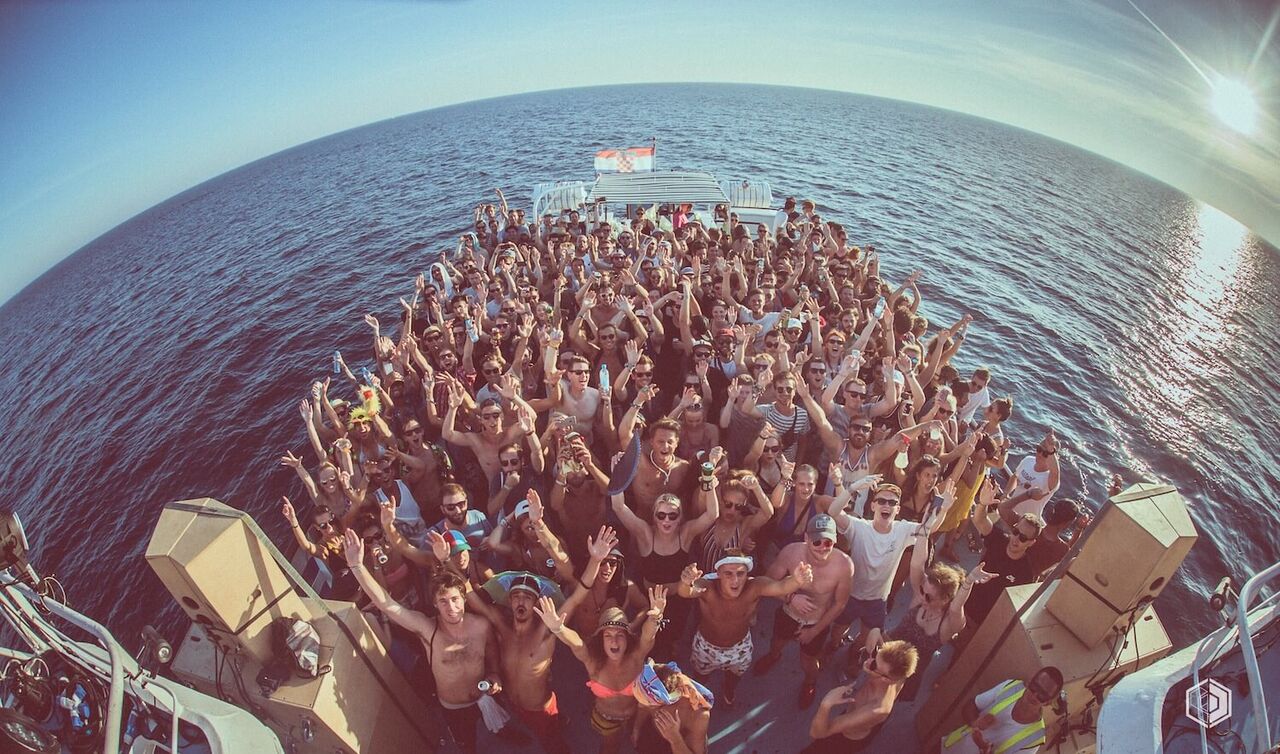 When we met you in London this year you were a few days to announce the big news: you were launching the dimensions label, with about 300 artists that contacted you. With the work that you have, is it possible to each track one by one and really concentrating on it?

We listen to everything. Just yesterday a guy hit us up out of the blue with some music we’ve now signed him so If we didn’t listen to him we would have missed him. The label is a good balance beteween well established artists and a new artists. I think the balance is a similar that we have at the festival, both are very important. And also we don’t trust anybody else to listen to the festival. No short cut for that. 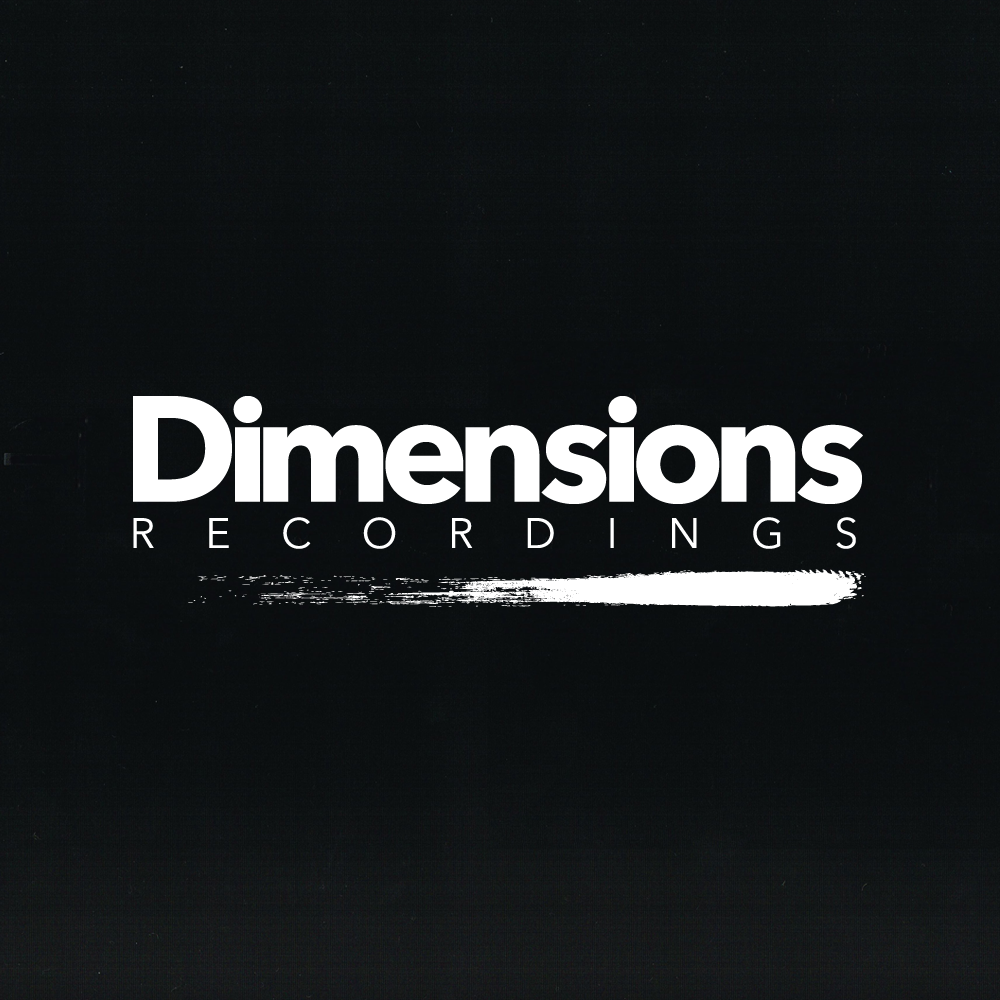 So let’s sum it up. the 12th of August the Sunwall festival begins in the same place in Pula in Croatia and the Dmensions festival, then the Outlook begins with a wider range of musical genres. Are you taking coffee, mate or just power naps?

We’re just taking a lot of coffee right now (laughs). Actually I’m quite sensible with these festival things. I think we both are quite sensible so a decent planning is to get to bed at 6 o’clock get up at 2 o’clock. 5 hours a night and not drinking too much and you can be okay. Save your blow-out for the end.

Trick question: can you give us the definition of sleeping?

Regenerate. At the festival it’s the only time you can’t hear music. Sleeping is cheating.

We’re doing a Dure Vie interview so here’s our hard life question, tell us your biggest snags while organizing the festival?

Andy : I think on my side competition, because there weren’t really other festivals that were doing line-ups like Dimensions, not many at all. Now there’s a shitload of them with very similar line-up, so it’s difficult to cut through, but we’re lucky we’re established. But there’s a lot of difficulty and suprises so that’s always a challenge. And each time it’s bigger so there is a pressure on the guys to outdo themselves, also as a Headline artist.

David : For me the challenge was to convince people to come because at that time people weren’t going to croatia this much. Because it’s a long way to for certain, but thereward is worth it. Now people know it, but that begginning period was a challenge but it was exciting at the same time because we were introducing people to so much good stuff: the location, the music etc. We knew we could overcome the challenge.